Happy trails to you and me. That’s pretty much how they make me feel, even when they are technical, steep, covered in snow, wide and smooth, muddy, dry, tree-lined or with beautiful mountain views. Trails are my happy place.

January 1st I did my first 5k with a Polar Bear Plunge (into Lake Washington – which was warmer than the mid-30° air temps that day) and it was a lot of fun! Not sure I HAVE to do it again, but I would if friends were doing it. The race was in Magnuson Park. I have to say, the ONLY reason I did it was for the plunge. I’m pretty tired of the route there since it’s almost always the same. This time was slightly different, but not enough to make me want to go back anytime soon.


(I also ran the Yukon Do It Half the end of December with a last minute bib acquisition. It snowed most of the second half and was great but we were sooooo cold because it was thick, wet snow.)

The next day I fretted. My amazing massage guy Trevor (Traveling Hands in Issaquah) got me to say yes to trying the (unofficial, group of people running the same trail, the same day, same direction) Fat Ass 25k on Tiger Mtn on Jan 2nd, oh, 6ish months ago. I figured I was safe and that he’d forget all about it. He didn’t, and a couple weeks beforehand sent me the info on where/when to meet. He is a REAL trail runner. He recently finished the Cascade Crest Classic 100 MILE race. Yeah, no decimal point. 100 miles. I laid stuff out the night before and then slept like crap. I woke up several times thinking Search and Rescue was trying to find me. I’ve run at Tiger Mtn before. There are lots of trails and some of them are obviously marked, others… Well, I was worried (and I did buy the topo map from REI a few days earlier, just in case!). I woke up, thought it over and sent him a quick msg that I was a chicken and to have fun. No big deal. Until he responded back:

The next messages were all about what I needed to bring (seriously, snow, pshaw…can’t be much, whatever), etc and I got my ass moving and out the door. Poor guy, we were runners 89 & 90 (I think) to check in (you put down your name, time, how far you’re going – some did 2 loops, then check back in with your time when you are done. No one is left behind. Awesome!). Did I mention he finished in the top 10 for the Mt Si 50k last year? Okay. I can do this, he’ll make sure I get headed on the right trail.

Well, he either took pity on me or really is just that great of a guy, and he stuck with me the ENTIRE time. 5-1/2 hrs. 3,759′ elevation gain, more than half the time we were in over a foot of snow.


From here (around 11 miles), it’s finally mostly downhill. Sounds great, I’m ready! We went about .25mi and there was a guy bundled up, battery operated Christmas lights strewn about, playing “Dashing Through The Snow” on a ukulele! BEST ENTERTAINMENT EVER! We stopped and chatted then he dove into “Rudolph, the Red-Nosed Reindeer” as we left. So much fun. Until the ice.

Snow is awesome, love it. I grew up at the beach so I’m still like a little kid and love snow. Ice. Well, I prefer that in a glass with whiskey. I did not have YakTraks or MICROspikes, but I did have my very cushy Altra Olympus Trail Shoes…. which have zero traction on ice. I fell three times. One of those times I was thankful I had my hydration pack on because it was just enough to keep my head from hitting the ground. Another time I came down on my elbow, which is still a little wonky a month later. I have YakTraks now (my coach grabbed me a Costco pair – thanks)! Once we were off the ice, it was smooth sailing. I have to say I was tired, but after miles and miles of hills and snow, I felt pretty happy that I was running the last 1.5miles at a decent pace.

Trevor kept me going. He talked when I couldn’t catch my breath climbing those hills. He entertained, he gave pointers on form and techniques for handling the terrain. He led or stayed back, depending on what he thought I needed. We stopped and chatted with other runners (our moving time was actually 5:17) along the way. He made sure I saw the subtle trail markers so if we DID end up separated, I’d be okay. I was. In fact, better than okay. It was AMAZING! 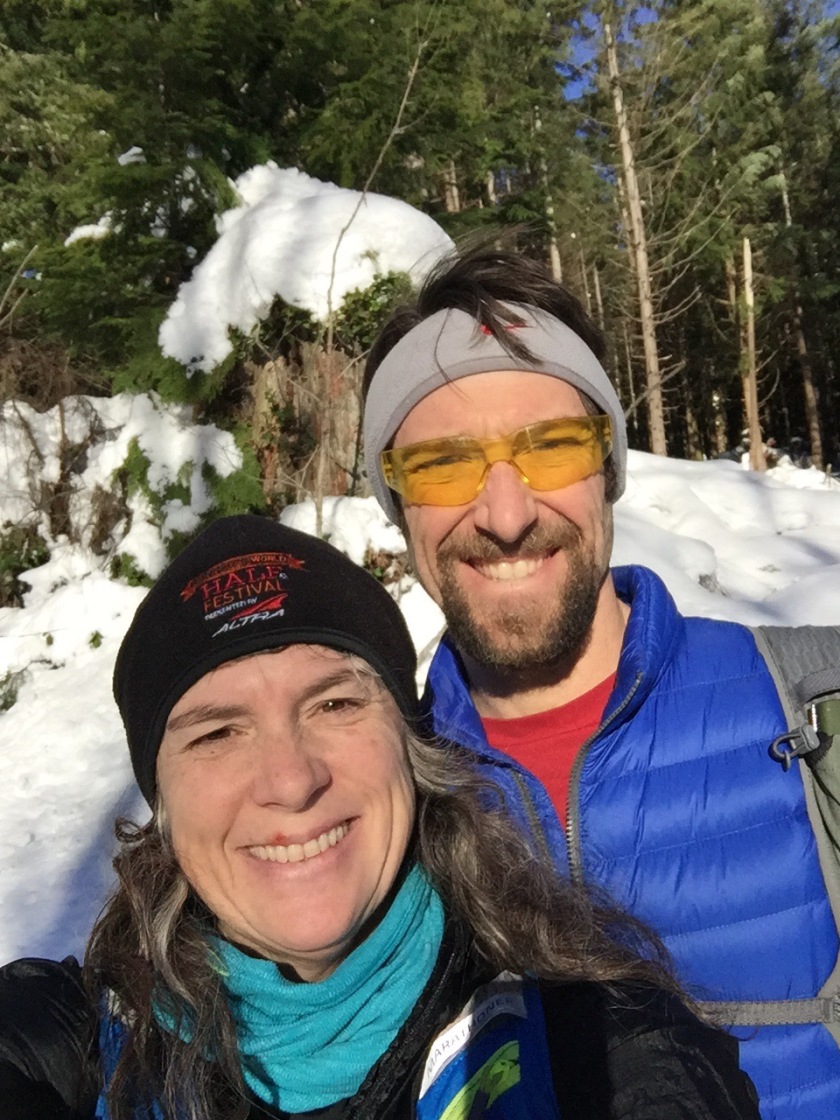 This weekend I have trail run on the schedule for both days. Our running group buddy, Katey, is coming up from sunny & warm AZ to run so today we will go try out a new to us trail for fun and tomorrow our training group heads to Carnation for trails for a long run.

I’m working hard on hills for the next couple of months. Red (my daughter) & I are running the Hot Chocolate 15k for the third year (with a bunch of Pip Runners) and my brother and I (and hopefully my SIL) are gearing up for the Horse Butte 10 Miler again! SUPER excited for a few days with family in Bend and a beautiful race location.

What’s up next for you? Frost Eagle 5 mile next weekend.

Trails or road? Trails, at least until the bees reappear.

Snowy mountains or sandy beaches? I cannot choose between, both make my heart smile!

I'm a mom, wife, runner, knitter, reader and procrastinator. I am fairly fluent in sarcasm, which has gotten me into trouble now and then. I enjoy writing (rambling on, as I'm often reminded), even though I'm most often the only one interested in reading what I have to say. So, to satisfy the writing bug and my latest addiction (running), I've created this for me. My own little universe, where I can blabber on about all the geeky running stuff that I like, goofy photos no one wants to scroll past, and now and then talk about what's happening in my universe in general. If you are reading this, feel free to comment - as long as you're mostly polite, constructive or best of all, just have something nice to say. Cheers! View all posts by silverhonore

One thought on “Happy Trails to you ”